The National Library Received the Award of Gratitude for Public Spirit

The National Library Received the Award of Gratitude for Public Spirit

Virginijus Vitalijus Vilkelis, Head of the Department of Mobilisation and Civil Resistance under the Ministry of National Defence, awarded Prof. Dr. Renaldas Gudauskas, Director General of Martynas Mažvydas National Library of Lithuania for the public spirit initiatives of the National Library and its support to the state in the face of the Covid-19 crisis.

Even while on vacation, V.V. Vilkelis, Head of the Mobilisation and Civil Resistance Department, was glad to thank everyone on behalf of the state coalition who, through their activities and initiatives, contributed to faster and more efficient crisis control. ‘Our department is an institution of the national defence system, which, among other important functions, organises and coordinates the cooperation of the national defence system, state, municipal institutions, establishments, and non-governmental organisations in the field of civil resistance, public spirit and patriotic education, as well as ensures civil protection arrangements, preparation and responses in emergency situations. During the quarantine, we started to coordinate the public spirit initiatives of volunteers and now we would like to thank them all on behalf of the state,’ said V.V. Vilkelis.

Prof. Dr. R. Gudauskas reminded everyone that the National Library, being a socially responsible institution, contributed to particularly relevant public projects. As the Covid-19 pandemic accelerated, there was an obvious lack of protective measures in Lithuania, as elsewhere in the world. This encouraged the residents to take public spirit initiatives and look at the situation creatively. The robotics school in Vilnius, along with the scientists, engineers and specialists of the company 3DCreative, created a 3D model of a protective face shield to reduce the risk of infection. The major Lithuanian libraries also offered their support with a 3D printer network throughout Lithuania and volunteer staff. Donatas Kubilius, the administrator of the creative workshop ‘PATS SAU’, initiated by the National Library of Lithuania, became the curator of this initiative and consulted all the libraries that joined the campaign. Less than a week following the introduction of the idea, as many as 54 Lithuanian public libraries started printing components for the production of protective face shields with their 3D printers. Over 8,500 shields were produced and distributed to various Lithuanian medical, and other, institutions that worked in high-risk areas during the quarantine.

‘Such initiatives can only exist if the organisations have creative, courageous and impetuous employees. The quarantine lock-down for coronavirus has only revealed how important social responsibility is and how well libraries and librarians are able to adapt to this rapidly changing world,’ said the Director General of the National Library.

Prof. Dr. R. Gudauskas also reminded the audience of other activities performed by library volunteers. In order to control the epidemiological situation in Lithuania, the National Centre for Public Health turned to the public for help in working with people in self-isolation and who had contact with people suffering from Covid-19. The National Library invited its staff to contribute to this initiative as well. After special training, volunteer staff called people and, according to a questionnaire provided by the National Centre for Public Health, interviewed them and entered the data into a monitoring system.
‘Although the scale of volunteer work was not so large, we should be aware that such important organisations may find themselves in a critical situation during a pandemic and, whenever possible, we as citizens should contribute and help as much as we can,’ said the Director General of the National Library.

During the tour of the National Library, Giedrė Čistovienė, Head of the Project Management Department, gave a brief overview of the major projects of the library, presented creative workshops which printed protective face shields, and introduced the activities of the National Library’s TV studio, from which reliable and expert-confirmed knowledge about Covid-19 was broadcast during the quarantine.

‘Libraries are re-reviewing their services and what they provide, and are adapting them to new conditions. We are thinking about the digitisation of content, services and activities, as well as the dimensions of big data, new projects and initiatives to address the issues faced by society nowadays. In our country, I think this role is perfectly performed by the Lithuanian National Library - proceeding hand in hand with new technologies and a rapidly changing society, we are also showing the direction to all Lithuanian, and even foreign, libraries,’ summed up Prof. Dr. R. Gudauskas at the meeting. 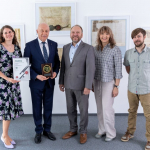 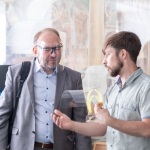 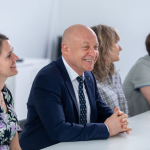 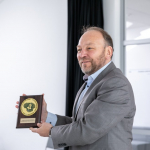