On 6th January, the Speaker of the Parliament Viktorija Čmilytė-Nielsen met with the Director General of the Martynas Mažvydas National Library of Lithuania, Prof. Dr. Renaldas Gudauskas.

At the beginning of the meeting V. Čmilytė-Nielsen welcomed the Head of the Library, with his new role in the United Nations Educational, Scientific and Cultural Organization UNESCO, and expressed his gratitude for the enhanced representation of our country in international institutions.

Prof. Dr. R. Gudauskas briefly presented the activities of the National Library during the quarantine period. He talked about the main functions of the library, successful project activities, and emphasised the parliamentary function of the library and the role of big data. “The parliamentary function of the Library will be strengthened by us providing quality analytical information to the Parliament and other state institutions and municipalities. The future belongs to big data-based analytics; therefore, we are focusing on this. We hope that this will significantly contribute to the implementation of the state innovation policy and increase its competitive advantage, as well as the development of the knowledge society in Lithuania”, — said Prof. Dr. R. Gudauskas. The Director General of the Library also emphasised the importance of cooperation with the Parliament’s Culture committee, the Ministry of Culture and other state institutions.

The Speaker of the Parliament was also interested in possible future prospects for cooperation between the Parliament and the National Library. The Director General of the Library said that the provision of information, providing both bibliographic and analytical material, was smooth and productive, and cooperation could be expanded by listening to the specific needs of the Parliament.

The Director of the Department of Information and Communication Sciences of the National Library, temporarily acting as Deputy Director General for Science and Strategic Development, Prof. Andrius Vaišnys, also participated in the meeting with the Speaker of Parliament. While continuing the topic of the conversation, A. Vaišnys proposed several specific solutions, and at the same time mentioned the most pressing problems related to information technologies, databases, and the development of an integrated system.

The Speaker of the Parliament V. Čmilytė-Nielsen thanked them for hosting his visit and expressed his hope that cooperation between these important national institutions located in the same neighbourhood, the Parliament and the National Library, would reach a new qualitative level.

Meeting with the Chairman of the Parliament Culture Committee V. Juozapaitis

Later, Director General of the National Library Prof. Dr. R. Gudauskas met with the Chairman of the Parliament Culture Committee, Vytautas Juozapaitis, and presented the plans for the creation of a Lithuanian integrated information library system, to be set up by the National Library, which have been passed into national law. He also familiarised the attendees with the progress of the implementation of the information infrastructure projects, which have cost 24 million Euro.

During the talks, the possibilities of the renewal of the parliamentary function of the National Library, which it has been performing for 30 years, were also discussed. The Library submitted a proposal to revise the Library Law accordingly, which would comply with modern information policy requirements.

The meeting was also attended by the Director of the Department of Information and Communication Sciences, acting as Deputy Director General, A. Vaišnys. Prof. A. Vaišnys introduced the Chairman of the Culture Committee to the information supply structure of the National Library. 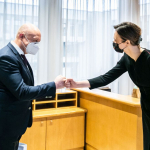 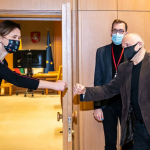 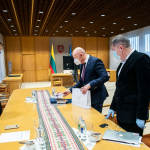 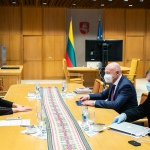